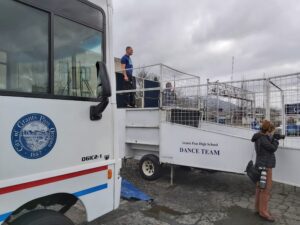 The Polar Plunge fundraising event normally is in a pool with participants only dunking once.

The public got the chance to dunk officers several times in frigid temperatures on Saturday.

Captain Jim Hamilton said he’s been involved with the plunge for about five years and it’s something he looks forward to.

“Their sportsmanship is just amazing to see and so when you get involved with that and you see that, it makes the cold well worth it,” Hamilton said. “I’d come out every day if we needed to to help support that. So, it’s huge to see those athletes to be able do what they do,” he added.

You can donate anytime to the Polar Plunge website to donate to Special Olympics Oregon.