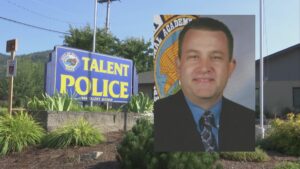 TALENT, Ore. — The Talent Chief of Police says he’s retiring after 3 decades of being on the force.

Chief Tim Doney says he is “transitioning out of active law enforcement and working with Oregon law enforcement/public safety agencies in a different employment capacity.”

Back in June, Talent Police announced a plan to cut back hours.
That’s after several officers announced they were leaving or considering job offers elsewhere.