KLAMATH FALLS, Ore — Three national championship winning men’s basketball teams from Oregon Institute of Technology, will be inducted in the Oregon Sports Hall of Fame and Museum later this summer.

Officials announced the 2004, 2008, and 2012 teams, are soon to be inductees for the hall located in Beaverton. All three teams in each year, upset top ranked teams in the national championship – twice against Bellevue University from Nebraska.

Levell Hesia was a freshman when OIT won its first ever title in 2004 as the 16th seed. The Klamath Falls native said they were not expected to go far in the tournament.

“You know, Klamath Falls, Oregon, who knows where that’s at,” Hesia told NBC5. “No one expected us to win. [The HOF] is just a huge honor and I never expected our team, myself, teammates, or coaches to be inducted in such a prestigious way.” 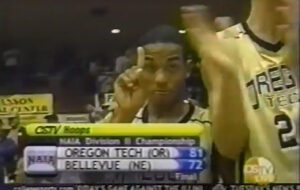 The Owls landed back on the championship stage in 2008, after receiving an at-large bid in the tournament. They defeated Bellevue again, 63 to 56, to capture its second title in program history.

The team was led by its lone senior Ryan Fiegi – a South Medford alum.

“I still remember it like it was yesterday, it was such a fun ride,” Fiegi said. “We had a lot of flux the year before with some seniors leaving, and it was kind of a transition year. The stars aligned.”

Hesia and Fiegi were coached by now retired basketball hall of famer, Danny Miles. Both players said learning from Miles over the years, continues to help them with their careers today.

“That discipline that [Miles] had in the classroom and outside the classroom, transitioned well into my career,” said Hesia. 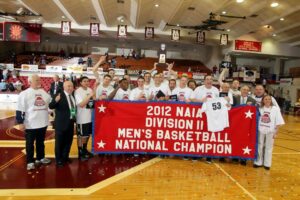 Despite being up against the odds at the time, Hesia and Fiegi said representing and winning it all for the Klamath Basin, is something they’ll never forget. The two are excited to be recognized alongside their teammates in late July.

“I can’t imagine a better fan base for a small college in the country to win it for,” Fiegi said. “To be able to bring it home was of course a dream come true for all of us.”

The inductees will be recognized at Providence Park in Portland on July 31st. NBC5 also exclusively spoke with coach Miles on the historic honor. That video can be seen here: Five on 5 – Danny Miles – Retired Coach, HOF OIT MBB