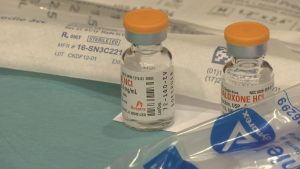 MEDFORD, Ore.– A local non-profit held a training on correctly using a drug to reverse overdoses. It comes on the heels of Medford Police reporting 6 heroin overdoses in the last 30 days.

Max’s Mission met with people at the Medford Public Library on Wednesday to distribute the antidote, naloxone, a drug that counteracts opioid and heroin overdoses.

The group also taught people how to correctly administer it.

Those who came to the training, received a certificate, and free nasal spray or an intramuscular kit meant to administer the drug.

“It’ll have a ‘Good Sam’ card which tells them about the law,” said David Pinksy, a founder for Max’s Mission. “That if they call 911, if they use Narcan and law enforcement comes, they’re not liable.”

The Good Samaritan Law provides basic legal protection for those who assist someone injured or in danger. Officials want to make it known that you won’t be liable for helping to save someone’s life if there happens to be unintended consequences by assisting.

During the session over 60 nasal sprays and intramuscular kits were given out. The next training and distribution in Medford is planned for May 23 from 4-7 p.m.