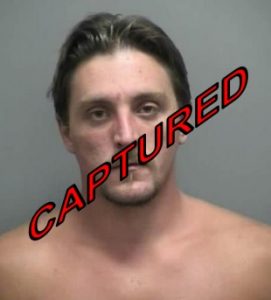 Grants Pass, Ore.- Tracey Chen never met Joseph Jakubowski in person, but they connected on Facebook over their similar feelings about the government. They weren’t in regular contact, but it didn’t surprise her at all when she received a Facebook message from him.

“It was only last month that he sent me a private message saying, ‘Hey, hey, it’s Jimmy John, let me in. I have a letter… remember the letter I told you,'” the Grants Pass native told NBC5 News in an exclusive interview.

That letter was a 161 page manifesto- either very similar to, or an exact copy, of the one Jakubowski is accused of sending to President Trump.

It’s that manifesto, and a gun store robbery, that made Jakubowski the focus of a ten day manhunt, which came to an end in a Wisconsin farm field early Friday morning.

Jakubowski was found hiding under a tarp in a primitive camp site. Despite written threats and the accusations he stole more than a dozen guns, Jakubowski was taken into custody without incident. Police say he didn’t show any of the violence demonstrated in the manifesto, which read, in part “We the people should be out for these sick minded people belonging to the system. We need to spill their blood!”

Those statements… are just a small fraction of the message in the manifesto. Jakubowski told Chen his goal was to spread the word about what he believed the government was doing to the population as a whole.

Chen didn’t get that chance. She read 90 pages of the manifesto before Jakubowski disappeared and the FBI came knocking on her door.

NBC News sources confirm the copy she had was authentic.

Among the writings in the document, references to health insurance, taxes and religion as examples of the government trying to brainwash its citizens. Despite some violent calls to action, Chen says Jakubowski isn’t a violent person.

“My understanding of his understanding was that violence is wrong unless it’s self defense. And that’s why he can’t stand the government. Because they don’t understand that,” Chen said.

Chen says she hopes Jakubowski isn’t sent to prison. She told NBC5 News she believes he needs to move to Oregon or someplace similar, where his views will be better accepted.

You can read the pages obtained by NBC5 News HERE (part 1) and HERE (part2). The document is unedited and includes some profanity and potentially disturbing language.