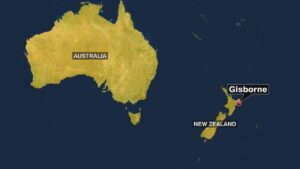 There is no tsunami danger for the U.S. West Coast, British Columbia, or Alaska.

There were no immediate reports of damage, but the National Emergency Management Agency (NEMA) advised people in some coastal areas to move immediately to high ground.

Video shows a resident in his bedroom reacting in surprise as it and its contents shake during the earthquake.

The closest major city to the epicenter is Gisborne with a population of about 35,000.

People near the coast in the area were told to evacuate.

Aftershocks were still being recorded in the area.