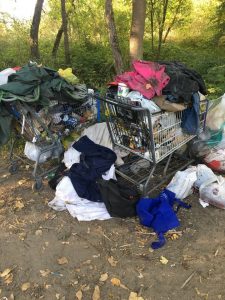 MEDFORD, Ore. — The Medford city council will vote on proposed changes to the existing camping ordinance on Thursday.

“If they simply vote it down, staff would still have to work on something. The prohibited camping ordinance in its current format, with its current prohibition on camping and sleeping outside, is not a viable long term solution,” said city deputy attorney Eric Mitton.

The city council is considering taking action to strengthen the city’s laws and prohibit camping in places like the Bear Creek Greenway. Here’s what will change, if it passes:

The amendment would list specific times, places and regulations for sleeping outside and camping. Mitton says the city is working to involve multiple agencies in the changes.

“As a police chief, I don’t think that folks remaining on the Greenway is a healthy sustainable option. There’s great things happening in our community that are much more sustainable and don’t cause environmental damage,” said Clauson.

However, grassroots activists in the community say moving people off the Greenway violates their human and constitutional rights. “This is a pretty cruel idea. There are some pretty inhumane policies going into this ordinance. Our overall goal is not not have this ordinance pass,” said Emily Mann with the Housing Justice Alliance Coalition.

Mitton says there is lots of misinformation about the proposed changes, so he encourages everyone to read the ordinance before forming an opinion.

“It’s technically against the law to sleep on a park bench, and that’s actually what we’re rolling back with this amendment,” said Mitton. He says the city council made changes during its last workshop session.

Within those changes, car camping will remain a violation, no criminal penalties will be issued for creating an unauthorized tent camp, and the city could designate certain places for lawful camping during emergencies.

The city council meets Thursday at 6 pm to vote on the ordinance.