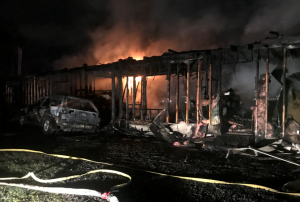 Medford, Ore. – A local family lost everything in a house fire Tuesday morning.

Medford Fire-Rescue responded to a house on fire just after 3 a.m on the 3700 block of Crater Lake Avenue.

Six people were inside the house at the time, everyone inside was able to get out in time.

One adult went to the hospital as a precaution for smoke inhalation.

One neighbor next door said he’s in shock.

“It was weird because I would never think I would ever experience something like that,” Greg Wallace said.

The family received help from the American Red Cross and the Rogue Valley Chaplains Association.

The cause of this fire is still under investigation.