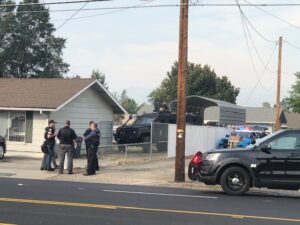 MEDFORD, Ore. – A Medford neighborhood was blocked off as police tried to defuse a standoff Wednesday morning.

Medford dispatch said at about 5:30 a.m. on September 23, they responded to a reported small fire at a home in 2200 block of Crater Lake Avenue. The fire was extinguished without issue, but the suspect returned to the scene two hours later and assaulted one of the residents.

Police returned to the home around 7:45 a.m.

When officers arrived at the scene, the suspect was reportedly armed and wouldn’t come out of the house. Police tried to coax the man out and deployed a SWAT team. Eventually, officers went inside the home, but the suspect was gone. They later found the man on Cherry Lane in east Medford at about 11:00 a.m.

The suspect was identified as the victim’s family member, Jeffrey Aaron Moore. He was arrested without incident and taken to jail.

Moore is being charged with first and second degree assault as well as first degree attempted arson.