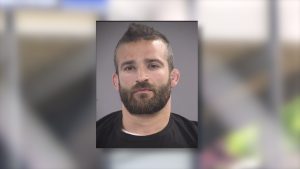 Noah Scott Berman, 30, is being charged with counts of sexual abuse, tampering with a witness and luring a minor for inappropriate sexual conduct he had with an underage student since November 2019.

“It’s nice to see that being utilized and being utilized effectively cause when it comes to situations like this, in order for us to find out it happened and actually put a stop to it somebody has to come forward somewhere,” said Lt. Mike Budreau, Medford Police Department.

According to reports, the tip came in on April 25. While police investigated to find out who the victim was, the high school was also contacted to make them aware of the situation. Two days later Berman was put on administrative leave.

Police say soon after Berman contacted the victim and told her not to talk about the relationship with investigators. Records show Berman lives in a home several blocks from the high school. Neighbors tell NBC5 News Berman had a wife and three children.

“This is a gross age difference and this suspect was in a position of power and trust over this juvenile,” said Lt. Budreau.

Police say Berman and the young girl are said to have communicated through the social media app Snapchat. The parents of the young girl apparently had no idea this was going on until police notified them.

The app allows users to send photos to each other that was originally set up to disappear after 10 seconds. The company has since increased the amount of time videos and photos can last.

“We encourage parents to look at your child’s phone, see what the apps are, and have access to those apps and securely see what’s going on,” said Lt. Mike Budreau. “Maybe even restrict some apps if you feel they’re a little too dangerous.”

South Medford’s principal sent out a letter to families on Friday about the investigation. In the letter, it encourages families and their children to reach out to school resources if needed. You can read the full letter below.

Berman posted bail on Friday and NBC5 News went to his home. He declined to comment.

Berman was also a strength and conditioning coach for the South Medford High football team and consulted with the Medford Rogues as a strength coach.

On Thursday afternoon I was notified by the Medford Police Department that one of our staff, Mr. Noah Berman, had been arrested for alleged inappropriate conduct with a student. As always, our primary concern is the safety and well-being of students and this situation is deeply disturbing for all of us. Although we have limited information at this time, we are, of course, cooperating with all law enforcement agencies as they continue to investigate.

We were made aware of this allegation through our Safe Oregon Hotline (run by Oregon State Police) in late April and immediately placed Mr. Berman on paid administrative leave as required by Oregon law. The investigation resulting in charges and an arrest was conducted by the Medford Police and Department of Human Services.

My primary concern today and my reason for writing to you is the well-being of the students at South High School. During quarantine, it may be more challenging for us to help but we are committed to doing whatever we can to support students and families during this time.

The Medford Police Department will release details of their investigation to the media today and I encourage you to take a moment to talk with your children about any concerns they may have and about trusted adults they can talk to in times of need. Our students’ physical, social and emotional safety is important to us and we will have counselors on call at  (541) 581-0189 – please leave a message as they may be talking with other students and someone will get back to you just as soon as possible. You can also email counselors at [email protected]; [email protected]; or [email protected].  Please also refer to this Information Sheet for additional local resources.

In situations like this, rumors and mis-information are common and we certainly want to minimize those things. However, parents and students can report tips by calling (844-472-3367) or texting (844-472-3367) the anonymous Safe Oregon Tip Line. Additionally, if students have information or concerns to share, they may contact an administrator at South or call the Medford Police Department 24/7 Tip Line at (541) 770-4784. For assistance or information in Spanish, please call SMHS at 541-842-3638.

UPDATE 5/20/2020 – This post has been updated to reflect Berman’s involvement with the Medford Rogues was not in an official capacity.