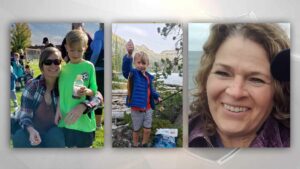 Update: Utah police made the following update Thursday evening: “We are happy to announce that Terran Butler has been safely located in Coos Bay, Oregon. Emily Jolley has been taken into custody. This is still an active investigation, so we are unable to release additional details, but wanted to inform the public, who has been extremely helpful in providing and sharing information in this case, that he has been found safe.”

Original story: MILLCREEK, Utah – An Amber Alert has been issued in Utah for a missing boy who may be in Oregon.

Police said on September 26, 6-year-old Terran Butler was in Salt Lake City, Utah on a court-supervised visit with his biological mother Emily Jolley when she took him without consent.

The day after the disappearance, police speculated Emily may be taking Terran to Washington State in a 2008 blue Toyota Prius with Utah plate E847GT.

On October 1, the Unified Police Department of Greater Salt Lake said new information indicated Emily and Terran were in Roseburg, Oregon in a 2015 blue Honda Civic with Utah plate X371WW. They were believed to be headed toward Yachats.

“We have information that Emily and Terran are likely with Bonnie Jackson, a sympathizer and personal friend of Emily,” police said. “We have included photos of Bonnie and are asking the public to share this information, especially if you have friends in the Oregon area.”

Anyone with further information is asked to call the police.