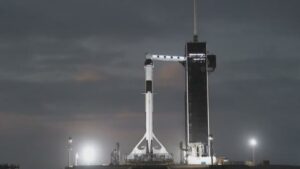 (NBC News) Four astronauts are in place and ready on the eve of what could be a historic launch from Cape Canaveral.

After a successful demonstration flight earlier this year, NASA begins what they expect to be a regular, continuous commute to the International Space Station in a ship created by someone else.

The SpaceX Falcon 9 is set to blast off Saturday for its first-ever operational mission as a part of NASA’s Commercial Crew Program.

The rocket will carry three U.S. astronauts and a fourth from Japan’s space agency to the ISS.

The crew has dubbed the capsule “Resilience” in a nod to the challenges of 2020.

The launch also marks a return of rotational flights from U.S. soil in a U.S. built spacecraft.