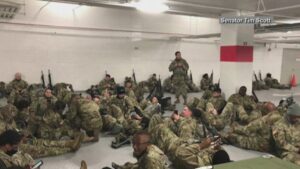 According to reports, Congress was in session and increased foot traffic caused Capitol police to move the troops to the Thurgood Marshall Judicial Center garage that has heat and bathroom facilities.

As the news spread about where the troops were moved, some lawmakers expressed outrage.

In a statement on Twitter, Senator Tim Scott said in part, “Our troops deserve the utmost honor and respect for securing the Capitol and defending democracy this week.”

He went on to say that whoever made the decision should be held accountable.

The inauguration task force commander confirms the National Guard troops have been moved out of the garage and are taking their breaks near Emancipation Hall.

Capitol police said they did not instruct the troops to leave the Senate building, in contradiction with the National Guard.