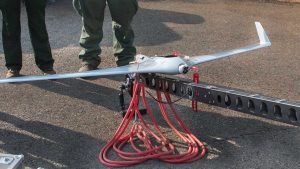 JOSEPHINE COUNTY, Ore. – An aerial drone is helping crews on the ground fighting the Klondike Fire burning in Josephine County.

Drones are increasingly being used to map fires and find hot spots that would otherwise go unnoticed until they flare up. In addition, drones can fly in smoky conditions that would ground manned aircraft. Night flights are also routine.

The U.S. Department of the Interior said fighting fires with drones has significant advantages, particularly when compared with manned flights. Using their figures, operating a drone costs $50 an hour while using a manned helicopter costs about $1,500 an hour. In addition, they’re easily packable and able to fly close to the ground in remote, rugged locations.

This past fire season, drones were deployed 707 times on 71 individual fires. 340 of those missions were in Oregon, the most of any state.  The total flights represented an 82 percent increase from the prior year.

According to the Illinois Valley Fire Department, a new drone brought in to assist with fighting the Klondike Fire can be carried in two boxes and can be launched via catapult in less than five minutes.

IVFD added this particular drone flies high above the ceiling of helicopters so it doesn’t interfere with active aerial operations. “It provides 4K video and Infrared imaging up to 24 miles away,” IVFD said. “It can spot hot spots for the ground crews that otherwise maybe overlooked only to pop up later. As you see in the photos it uses a Catapult takeoff, it can stay airborne for 3hrs and when it’s time to come home it will parachute back to base”