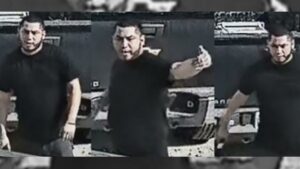 HOUSTON, Texas (KPRC/NBC News)  One person was arrested Tuesday and another person is being sought in connection with the slaying of a Houston, Texas police sergeant killed during a freeway shootout.

Houston police Chief Art Acevedo said Robert Soliz, 24, was arrested during a traffic stop. Soliz has been charged with murder in connection with the death of HPD Sgt. Sean Rios, Acevedo said.

Acevedo also released surveillance video and images of a second “person of extreme interest” in connection with the case. The video showed the person having a discussion with Soliz. A black pickup with mismatched rims is also seen in the video.

The chief said he believes Rios was killed during a shootout while trying to intervene in an exchange of gunfire between two vehicles that happened on the freeway.

“We do have 911 calls indicating exchange of gunfire between a white pickup truck and a Mercedes Benz matching the description of the vehicle that we have in police custody, and that’s the suspect’s vehicle,” Acevedo said. “We believe there’s a high probability that Sgt. Rios saw that incident between these two vehicles and, sadly, he ended up losing his life in trying to intervene on that surface street.”