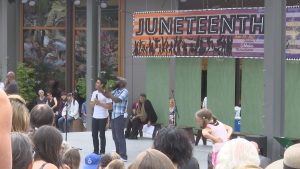 ASHLAND, Ore. — “We have to commemorate this time Juneteenth because it’s a way that way can move forward [and] exercise our ghosts,” said director of artistic engagement, Robert Goodwin.

A holiday the Oregon Shakespeare Festival has celebrated for the last twenty one years.

The event commemorates the end of slavery across the United States with a variety show filled with discussions, a play reading, and exhibits.

This year, performances will be virtual.

But Goodwin says it’s not the only thing that will be different.

“We’re seeing uprising and protests across our country primarily because our history of slavery has never been resolved,” he said.

Goodwin says artists will be bringing bold voices and visions to reflect the present moment, as national conversations about racial injustice continue to spark across the country.