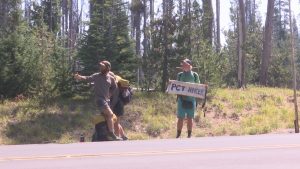 CRATER LAKE, Ore.– Throughout the summer backpackers have been traversing the Pacific Crest Trail looking to make the 2,659 mile journey.

Unfortunately, due to the wildfires, smoke and trail closures have become an issue forcing some to jump over portions of the hike. NBC5 News spoke with some hikers who say there are still plenty of people backpacking the trail and making the most of it.

“It was bad but it was manageable,” said Gnarwhal, a PCT hiker. “There was no major headaches. No one from our group had to really get off. So yeah, it’s been manageable.”

Among Gnarwhal’s group of three, one of the other hikers said they had a sore throat during portions of the hike across the California-Oregon border but other than that they continued to enjoy the outdoors.

However, as backpackers make their way through Crater Lake, there will be portion of the PCT between Bybee Camp and Red Cone Camp that is currently closed due to fire damage from last year’s fire.

Hikers can take the West Rim Trail to detour around the closed section.

If you need more information on sections of the trail through Oregon you can find out more at the Pacific Crest Trail Associations website.