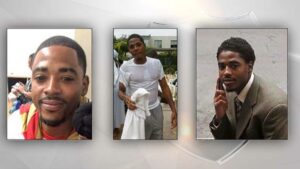 MOUNT SHASTA, Calif. – Police in Northern California continue to search for a man who has been missing for nearly a year.

Davohnte Morgan was last seen in the community of Mt. Shasta on May 5, 2020.

Police say Morgan was visiting Mt. Shasta from the Bay Area with his girlfriend. According to the girlfriend, they got into an argument on May 4th and she broke up with him. The next day, she told police she left the motel they were staying at and went for a walk. When she was returning to her room, she told police she passed Morgan but he seemed upset, so they didn’t speak. That was the last time anyone saw or heard from him.

Nearly one year after Morgan disappeared, Mt. Shasta police said they’re “continuing to investigate any leads that are being given and are hopeful for a resolution on this case.”

Morgan is described as a 28-year-old Black man, 5’11” tall with a thin build. He has a thin goatee and walks with a slight limp.

Morgan’s family is offering a $25,000 reward for information that leads to the missing man.