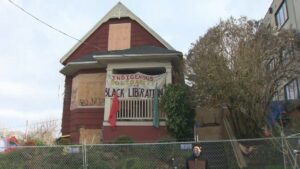 PORTLAND, Ore. (KATU) – A group marched along North Mississippi Avenue in Portland during the third day of an eviction protest. Some in the group were carrying guns.

As of Friday, demonstrators were still barricading several blocks on Mississippi.

Police said demonstrators fashioned handmade booby traps, like spike strips, fencing, and piles of rocks. They’re protesting in support of a family evicted from the home known as the “Red House.”

Mayor Ted Wheeler said he wants a peaceful end to the quote “occupation.”