CHICAGO, Ill. (WLS) – Chicago’s 40th annual marathon shut down roads around the city as the 40,000 runners made their way throughout the 26.2 mile race. 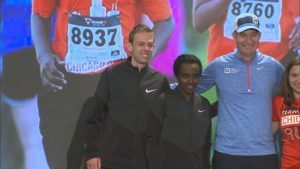 Clocking in at two hours, nine minutes and 20 seconds, Rupp is the first American male to win the Chicago marathon in 15 years.

“It’s real fun to see Americans doing well again and being competitive in these races,” Rupp said. “Hopefully we can inspire a future generation to pick up distance running and they’ll have that belief growing up that they could be there.”

The Oregon-based athlete’s father grew up in the Chicago area–in Maywood and Oak Park.

Rupp said being back in Chicago brought up fond childhood memories. “Most of the only vacations I took were coming to Chicago as a kid, you know to visit my family, go to a Cubs game and I just love it here.”

He wasn’t the only winner with Chicago ties. First place wheel chair winner for the women’s division and four-time Paraolympian, 28-year-old Tatyana Mcfadden said, “It’s just been amazing to be back out there and part of the hometown in Chicago since I go to U of I and the girls are incredibly fast so it was a really fun day and the weather was perfect”

In addition to the 40,000 runners were the more than million spectators cheering them on along the course. Jay Brown has watched all the action. He said, “I’ve been doing this for like 5 years. i Like to get at least 1,000 high-fives… so it’s all good.”