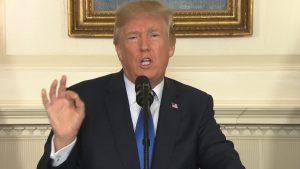 The president is decertifying a 2015 international nuclear deal with Iran, in defiance of near-worldwide support for the agreement.

“Iran is not living up to the spirit of the deal,” the president said in announcing his plan.

While not ready to withdraw from the agreement fully, the president threatened to do so.

“We will not continue down a path whose predictable conclusion is more violence, more terror, and the very real threat of Iran’s nuclear breakout,” President Trump said.

The president has given the U.S. Treasury Department the go-ahead to impose new economic sanctions against supporters of the Iranian military.

He also directed Congress to approve tougher actions against Iran, but leading Democrats say the presidents move will isolate the United States.

Some in the president’s inner circle also cautioned against this move, and other experts warn of international repercussions.