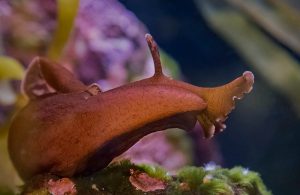 Newport, Ore. – Employees at the Oregon Coast Aquarium made an unusual discovery while cleaning out an 8,500 gallon concrete water storage tank.

According to the aquarium, when staffers began cleaning the reservoir, they discovered California sea hare.

The aquarium said the find is unusual because the California sea hare is usually found off the coasts of California and northern Mexico.

Only a handful of records show the sea hare this far north.