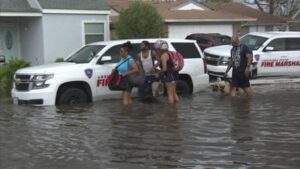 LAPLACE, La. (NBC) – The remnants of Hurricane Ida are continuing the punishing trek across the U.S., bringing torrential rain and wind as far as the Northeast Wednesday.

Millions across Louisiana and Mississippi are dealing with blistering heat and no power as rescues are still ongoing days after the storm hit.

LaPlace, Louisiana is about 30 or 40 minutes outside of New Orleans. It’s certainly one of the areas that was hardest hit by Hurricane Ida. The aftermath is still playing out Wednesday morning in real-time.

Not only can you see downed powerlines, which are everywhere, but lines cars with folks trying to get fuel because there was a shortage and they are desperate to get it for their cars, but also for their generators. And that’s extremely dangerous right now.

We are learning from the city of New Orleans, they’re treating 12 people for carbon monoxide poisoning after a generator was kept inside of a home. There are warnings going out from the city to be extremely cautious if you’re going to do that. And it’s also just a sign of desperation.

No electricity, no air-conditioning, water has been an issue, although NBC News is hearing from folks in this community right now, the waterlines are finally coming back online and heat-related illness right now is at the top of the list of concerns for city leaders because it is in the 90s, approaching 100 degrees.

So many folks without air-conditioning, something the city is watching very carefully as they continue to try to turn on the power as quickly as possible.

It could be within seven days that the majority of New Orleans gets the power back. Entergy, the primary provider, overnight tweeted out the first light shined in New Orleans east this morning.