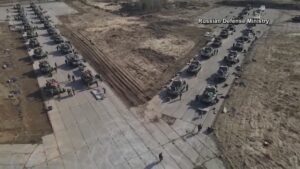 MARIUPOL, Ukraine (NBC) – Russia said Thursday its troops have returned to their permanent bases after conducting massive drills near its border with Ukraine.

Trenches dug by the Ukrainian military are not far from the Russian border and they serve one purpose: to prevent Russian troops and Russian-backed militias from invading and taking more

Ukrainian territory. The United States doesn’t want that to happen.

The U.S. backs the Ukrainian soldiers who dug and man the trenches. But Vladimir Putin is pushing how far he can go, trying to see what kind of reaction he will get from President Biden, from the new administration.

Earlier this month, Putin deployed tens of thousands of troops to the area, and it got President Biden’s attention.

President Biden warned Putin not to invade, but also in an attempt to de-escalate the situation, promised a summit. You can see the push and pull, the testing of the boundaries playing out in Ukraine.