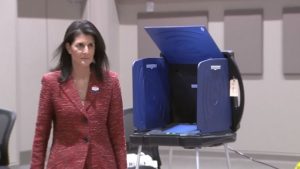 Haley was highly critical of Trump during the campaign.

Mitt Romney is now the front runner for Secretary of State and Dr. Ben Carson is now being considered as the Secretary of Housing and Urban Development.

After a lengthy interview with the New York Times editorial board, Donald Trump hinted Tuesday it’s time to make peace with his former campaign rival saying, in part, Hillary Clinton “suffered greatly” in many ways and that he isn’t interested in more investigations of her e-mails.