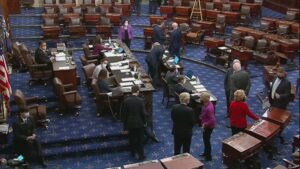 WASHINGTON, D.C. – Senate Democrats are considering changing the chamber’s rules and allowing the debt limit to be increased with a simple majority, plowing through without Republican support.

Four sources with knowledge of the discussion told NBC News that creating a new exception to the filibuster is gaining support among Senate Democrats. All asked to speak anonymously to detail closed-door discussions.

Congress has until October 18 to raise the limit or the Treasury says the United States may no longer be able to meet its financial obligations.

Moderate Senate Democrats have opposed getting rid of the filibuster.

The debt ceiling has become the latest flashpoint in Congress with an approaching deadline and partisan fighting over how it should be lifted.