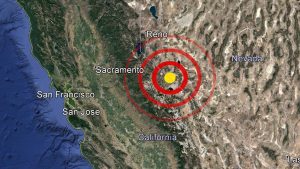 USGS data shows two initial quakes, both measuring at magnitude 5.7, took place a little over 17 miles from Hawthorne, Nevada a little after midnight on December 28.

The two quakes were followed by a steady stream of aftershocks, including a magnitude 3.7 quake recorded at 2:00 p.m. local time.

People reported feeling the quake as far away as Lake Tahoe, according to the USGS.

There have been no reports of major damage or injuries.