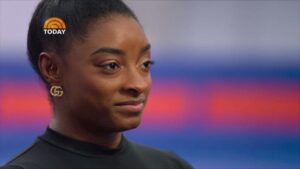 Jordan Chiles took her place in the uneven bars while Biles took on the role of cheerleader from the sidelines.

Biles later said it wasn’t a medical issue that prompted her withdrawal, but it was more due to stress.

It remains unclear if she’ll compete later in the individual events.

The Russian Olympic committee walked away with gold at this year’s women’s team event.