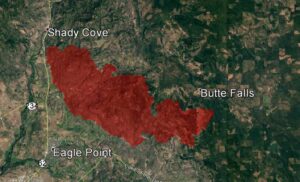 JACKSON COUNTY, Ore. – Firefighters will be keeping a close eye on a fire that prompted evacuations of several Rogue Valley communities.

The South Obenchain Fire started on the afternoon of September 8 about 5 miles east of Eagle Point. It eventually grew to over 32,000 acres, threatening the communities of Eagle Point, Shady Cove, Trail, and Butte Falls.

Level 3 evacuation notifications were in place for most of Shady Cove, Trail, and Butte Falls. Eventually, growth of the fire slowed enough for Shady Cove and Trail to be lowered to Level 2. However, Butte Falls remains under Level 3 notifications.

An evacuation map can be found HERE.

According to fire managers, a structural task force continues to patrol around the community of Butte Falls.

As of the morning of September 17, the South Obenchain Fire was 32,833 acres in size and 25% contained. The cause of the fire remains under investigation.

For the latest information, visit http://www.facebook.com/SouthObenchainFire