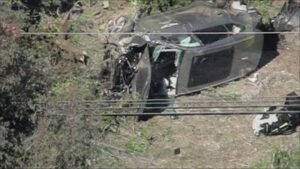 LOS ANGELES COUNTY, Calif. (NBC) – Earlier this year, Tiger Woods was seriously injured when the SUV he was driving went off the road in Los Angeles County.

Wednesday, investigators revealed the findings of their investigation into the crash.

Los Angeles County Sheriff Alex Villanueva said, “The primary causal factor for this collision is driving unsafe for the road conditions and the inability to negotiate the curve of the roadway”

The Los Angeles County Sheriff’s Department ruled the cause was simple: Tiger Woods was driving 40 mph over the speed limit.

The vehicle went off the road, hit a tree and, according to investigators, did some type of pirouette and landed on the vehicle’s driver side.

LACSD Captain Jim Powers said, “There is no evidence of braking throughout this collision. It’s speculated and believed Tiger Woods hit the accelerator instead of the brake pedal.”

Investigators believe high speed is the only cause of the crash.

Tiger Woods, who underwent surgery for an injured leg, has been cooperative according to authorities. The golfer is still recovering.

He issued a statement Wednesday thanking the LA County Sheriff’s Department and all the first responders and medical professionals who provided him care.