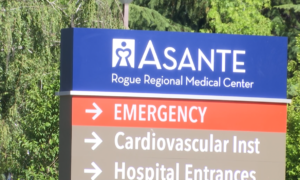 A coronavirus outbreak at Asante Rogue Regional Medical Center has sprung staff, health officials, and the county into action.

Asante’s Dr. Megan Frost says there were two incidents of exposure in recent weeks resulting in a handful of employees testing positive.

The first, was a nurse who Asante believes was exposed outside the hospital.

The second was an RRMC patient who was asymptomatic and not hospitalized for Covid-19.

“But due to our protocol before transferring someone to a nursing facility we test everybody prior to sending them there and she showed up positive on that test,” she said.

Dr. Frost says the hospital has since deep cleaned infected areas and is working closely with the county and state to find who may have been exposed.

“What we’re doing is not necessarily testing everybody because we literally have hundreds and hundreds of people that would move through these areas at any one time, but testing a cohort of people we feel like would have been in these areas,” she said.

At this time, Jackson County Health Officer Dr. Jim Shames says there are no known cases of patients being infected by Asante staff.

He says that’s a major concern with at-risk patients.

“Obviously the patients in the hospital are generally quite vulnerable so, as we do what we do, we want to make sure that everything can keep them safe is being done or has been done and so far, that certainly seems to be the case,” he said.

But the outbreak isn’t contained, just yet.

“Hopefully we have the whole picture, but we won’t know that for a while,” he said.

Asante says it’s currently reviewing the cases to see if there were any gaps in procedures and if they find that to be the case, it will make changes to its policies.

Out of an abundance of caution, Dr. Shames says everyone at the hospital, in places were people tested positive, are being tested.

He says it’s certainly possible they will find more cases.

But with more cases in the community, it’ll be difficult to trace them back to the hospital.