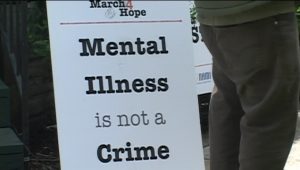 The group held their annual “Stand Up and Speak Out” event at Alba Park Friday afternoon. The event is designed to change the misconceptions surrounding people with mental illness.

” ‘It’s because they’re not a very good person, or they’re not very smart, or they have used drugs and alcohol and caused their mental illness’, that’s a huge part of stigma,” Laurel Nickels of Asante’s Behavioral Health Unit says.

“Although mental illness is a struggle for many people it’s not something to be afraid of,” Kathleen McNeill of Compass House adds.

Asante provided the Compass House with a $25,000 check to pay for a 2 year lease on a 6 unit transitional home for Compass House members.