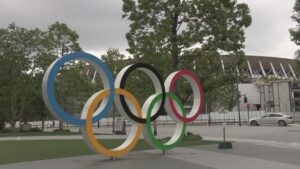 JAPAN (NBC) – With the opening ceremony for the Olympics summer games less than two months away, a lot of questions surrounding safety in Tokyo remain unanswered.

The U.S. State Department is now advising Americans against traveling to Japan because of a sharp increase in COVID-19 cases. A major Japanese newspaper and an official partner of the Tokyo 2020 Olympics is also calling for the games to be canceled. But the White House is standing by U.S. athletes hoping to compete.

White House spokesperson Jen Psaki said, “We’re talking about athletes of course traveling under the Olympic umbrella. This is one of the very limited categories of u-s travelers that are actually planning on going to Japan.”

Tokyo and nine other areas of the country remain under a state of emergency. The country is desperately trying to control a new wave of infections responsible for more than 5,000 new cases a day.

The surge is putting a strain on Japan’s health system. Officials are now racing to step up its initially slow vaccine campaign, opening mass vaccination centers for the elderly. But with less than two months until the opening ceremony, public concern about the games is being felt.

Despite a ban on overseas spectators, many in Japan still fear the arrival of tens of thousands of athletes, officials, journalists and support staff may cause another COVID surge.

Japan is moving forward. The Olympic torch is on a scaled-down tour around the country and test events to try out new Olympic venues are being held under a strict health code that will remain in place during the games.

Frequent testing, masks and temperature checks will be enforced.  No singing or chanting will be allowed and few spectators will be on site.

The head of the IOC is promising that at least 70% of athletes and officials will be vaccinated by the time of the games. In fact, three vaccine producers have promised to donate vaccines for that vaccination effort. With that said, this is tough stuff. There is the cost of canceling the games, should that happen. Equally the cost of spike in infections if that happens after the games  and then there’s the political cost. Japanese Prime Minister Suga is facing an election just months after the Olympics are staged.