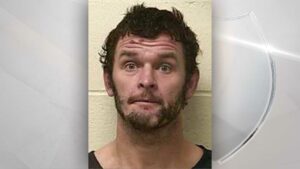 GRANTS PASS, Ore. — A suspect was arrested in connection with a robbery that happened earlier this month at a Grants Pass bank’s parking lot.

Police said on the morning of February 2, a 73-year-old man was pushed to the ground and robbed by a suspect in the parking lot of Umpqua Bank on Northeast F Street. The suspect fled the scene and was not immediately located by responding officers.

The Grants Pass Department of Public Safety said later that morning, there were multiple thefts from vehicles and burglaries on Scoville Road and Northeast Scenic Drive.

Following an investigation, police determined the thefts and burglaries were committed by the same man who robbed the elderly man in the bank parking lot. The suspect was eventually identified as 39-year-old Michael Gemar-Rickards from Washington.