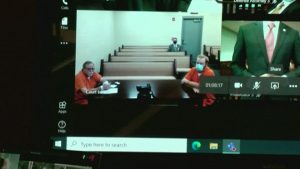 GLYNN COUNTY, Ga. (NBC) – Three white men charged with killing a black man who was running on a Coastal Georgia street in February pleaded “not guilty.”

Gregory McMichael and his son Travis both entered their pleas to nine counts Friday, including felony murder and malice murder. The two are accused of chasing, then shooting Ahmaud Arbery while he ran on a street.

A third man, William Bryan, who videotaped the chase and shooting, pleaded not guilty as well. His charges also include felony murder and malice murder.

Local police say the McMichaels told them in February they thought Arbery was a thief, matching the appearance of a burglary suspect recorded on a surveillance camera, and so they pursued him.

The lead Georgia Bureau of Investigations agent over the case said Bryan coordinated with Gregory and Travis McMichaels, by following Arbery in their trucks and essentially pinning him between their vehicles to prevent him from escaping multiples times before Travis ultimately shot and killed him.