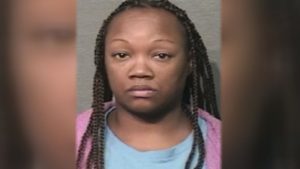 Houston, Texas (KPRC) — A former Houston Emergency Center 911 operator has allegedly confessed to hanging up on callers seeking emergency help because “she did not want to talk to anyone at that time,” according to Houston Police Department investigators.

Crenshanda Williams, 43, has been charged with interference with an emergency telephone call, which is a misdemeanor.

In one case, Williams allegedly hung up on Hua Li, an engineer who called to report a robbery in progress on March 12. Li said he had been buying lottery tickets at a RaceWay convenience store on FM 1960 West at Mills Road, when a gunman entered and tried to force his way through the door of a glassed-in security area behind the counter. As two clerks attempted to block the door, Li says he ran from the store and heard several gunshots on his way out. When he got to his car, he called 911 for help.

“They just said, ‘This is 911. How can I help you?’ I was trying to finish my sentence, and we got disconnected,” Li said.

Police said that Williams was the 911 operator, and that she terminated the call within a few seconds.

Li called a second time and got a different operator. By the time police arrived, however, the store manager had been shot and killed.