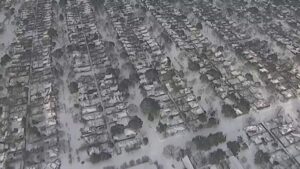 DALLAS, Texas (KXAS/NBC) – Many Texans are still dealing with power issues following a winter storm and continuing frigid temperatures throughout the state.

ERCOT, which runs the state’s electricity grid, said power companies are still trying to restore dozens of generating plants that froze during the first storm.

ERCOT said the rotating outages are necessary to save the grid from an all-out collapse, which would have happened if it didn’t shut down portions of the electric grid.

ERCOT CEO Bill Magness said, “If we had allowed, instead of going for these outages to allow a catastrophic blackout to occur, that could be for months.”

Magness said he hopes to have more power restored Wednesday and Thursday but it could be the end of the week for others.

ONCOR, which supplies power to most homes in north Texas, also said it’s waiting on ERCOT for the go-ahead to bring more homes back online and cannot estimate on when power will be restored to most neighborhoods.