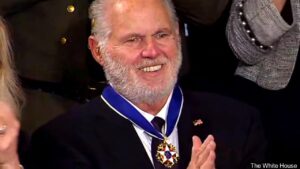 Limbaugh’s wife made the announcement on his radio show Wednesday.

He had been battling stage four lung cancer since February 2020.

The day after his cancer announcement, former President Trump awarded him the Presidential Medal of Freedom.

His politics made him a polarizing media figure but also garnered him millions of loyal listeners.