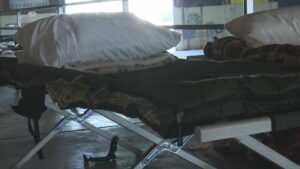 JACKSON COUNTY, Ore.— The Jackson County Expo has become a temporary home for many people evacuating due to the Almeda Fire.

Helen Funk with The Expo says in past years, the fairgrounds have opened up as an evacuation center for animals, but never for people.

Funk says 2,000 people ended up staying the night on Tuesday.

“It’s been a learning experience but I will tell you that it is so exciting to have people here and to be helping people because all summer long your expo has been pretty quiet.”

Some of the people who stayed at The Expo include Gary Isaksen and Amanda Mortensen.

Isaksen says he was taking a nap was woken up by police to evacuate.

“My room was full of black smoke so I had like 5 minutes to grab everything I could and I grabbed a bag of clothes and left everything else behind,” Isaksen said.

Mortensen said she lives in Phoenix and isn’t sure about the status of her home. She says it’s been surprisingly easy at The Expo.

“I’ve been really impressed with all the agencies working together. they got us breakfast, they got us dinner they worked miracles putting this together,” Mortensen said.

Helen Funk says they’re in need of donations and counselors. She says there are many people who have lost their homes and could use someone to talk to who is well equipped to handle the situation.

As for donations, she says these are the most important items needed:

Representative Pam Marsh was also at The Expo on Tuesday. She said she’s trying to bring in all the resources she can to support those who have lost their homes.

“I came out here to the expo because I wanted to figure out what we need here. It’s pretty clear we’re going to need a center of emergency operations for days if not longer than that,” Marsh said.

Marsh says she was in contact with Oregon Governor Kate Brown and is hoping to get the National Guard to help with emergency operations.