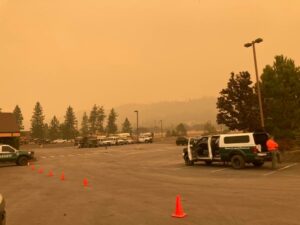 The Jackson County Emergency Management Center says the evacuation area begins on Rogue River Drive at the Takelma Boat Ramp and runs north on both sides of the road to Highway 62. Level 3 includes all of the City of Shady Cove and continues north on Highway 62 to include the community of Trail.

This is a result of the Obenchain fire, a fast moving, wind driven fire.