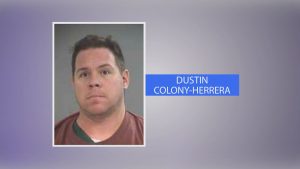 Central Point, Ore. – A former youth pastor was arrested in Central Point this weekend. He has been accused of crimes against children in California.

The sheriff’s office told me today that Dustin Colony-Herrera was arrested on an outstanding warrant at the Country Crossings Music Festival this past weekend.

According to the Riverside County Sheriff’s Office in Southern California, Herrera has an outstanding warrant for charges of sexually abusing children during his time as a youth pastor in the area between the years of 2000 and 2004. They say shortly after that warrant had been issued, Herrera moved to Medford.

Tonight, Herrera is booked in the Jackson County jail. He is waiting to be extradited to California to answer to the warrant issued against him.