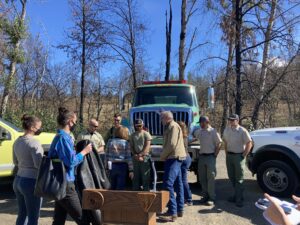 EAGLE POINT, Ore. — Political leaders from multiple forms of government were in the Rogue Valley Thursday, talking about the dangers of wildfires in the state. “The reality is that fire season is not a season anymore, it is a virtually year long event,” said the Principal Deputy Assistant Secretary for Policy, Management and Budget, Rachael Taylor. She filled in for Secretary of the Interior Deb Haaland during Thursday’s fire scar tour and delivered some remarks as the secretary had a family emergency.

“The increased frequency of fires is having real impacts of health effects, its having impacts on homes, businesses and communities. Obviously we’re in a fire scare here, seeing those effects first hand,” Taylor said.

At the podium, she was joined by Governor Kate Brown and Senator Jeff Merkley, all speaking about the devastation of Oregon’s fires over the past 13 months.

“Thousands of families were displaced, as you well know in southern Oregon, we are still rebuilding today,” said Governor Kate Brown. The south Obenchain fire burned over 3o,000 acres and destroyed nearly one hundred structures. This year, our Bootleg fire burned over 400,000 acres. A fire so vast, it created its own weather patterns and sent smoke to the east coast. It’s been clear for a number of years now that we are fighting fires of a new age,” said the Governor.

All three touched on the recently passed legislation in the senate, an infrastructure deal. It hasn’t yet passed the house. They say $1.5 billion is set aside in funding for the Interior’s wildland fire management programs. “The job that the firefighters are doing on the fire line is absolutely invaluable,” said Taylor.

On top of improving firefighter pay, the money would be used to reduce hazardous fuels and restore lands post-fire. “We have over two million acres that has already been approved for thinning in Oregon that we could have thinned already. It has already been checked off, if you will. We’re ready to move if we had the funds,” said Senator Merkley.

As the event came to a close, Governor Brown acknowledged the wildland firefighters who attended. “We really appreciate their leadership and their willingness to put their lives on the line to save Oregonians and frankly, protect property and protect, as we all know, the beauty and bounty of Oregon,” concluded Gov. Brown.

Afterwards, the department leaders and Senator Merkley then traveled to Crater Lake National Park to talk about current and future projects to make the park more accessible.