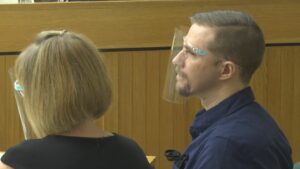 MEDFORD, Ore. — The trial for a man involved in an eight-hour stand off with police started on Tuesday.

Warren Alexander Rich is facing multiple charges including attempted murder, burglary, and unlawful use of a weapon.

Rich was arrested in November of 2018, after his mother called 911 saying he was threatening her with a rifle.

Police say Rich fired multiple shots inside the home and then came out and shot at a deputy.

Two of them fired back.

On Tuesday afternoon, the prosecution and defense made their opening statements.

The state is arguing Rich burglarized a property that was not his and then attempted to kill an officer.

The defense says Rich was under the influence of drugs.

They say he did not burglarize the property because it’s his registered address and did not intend to kill anyone.