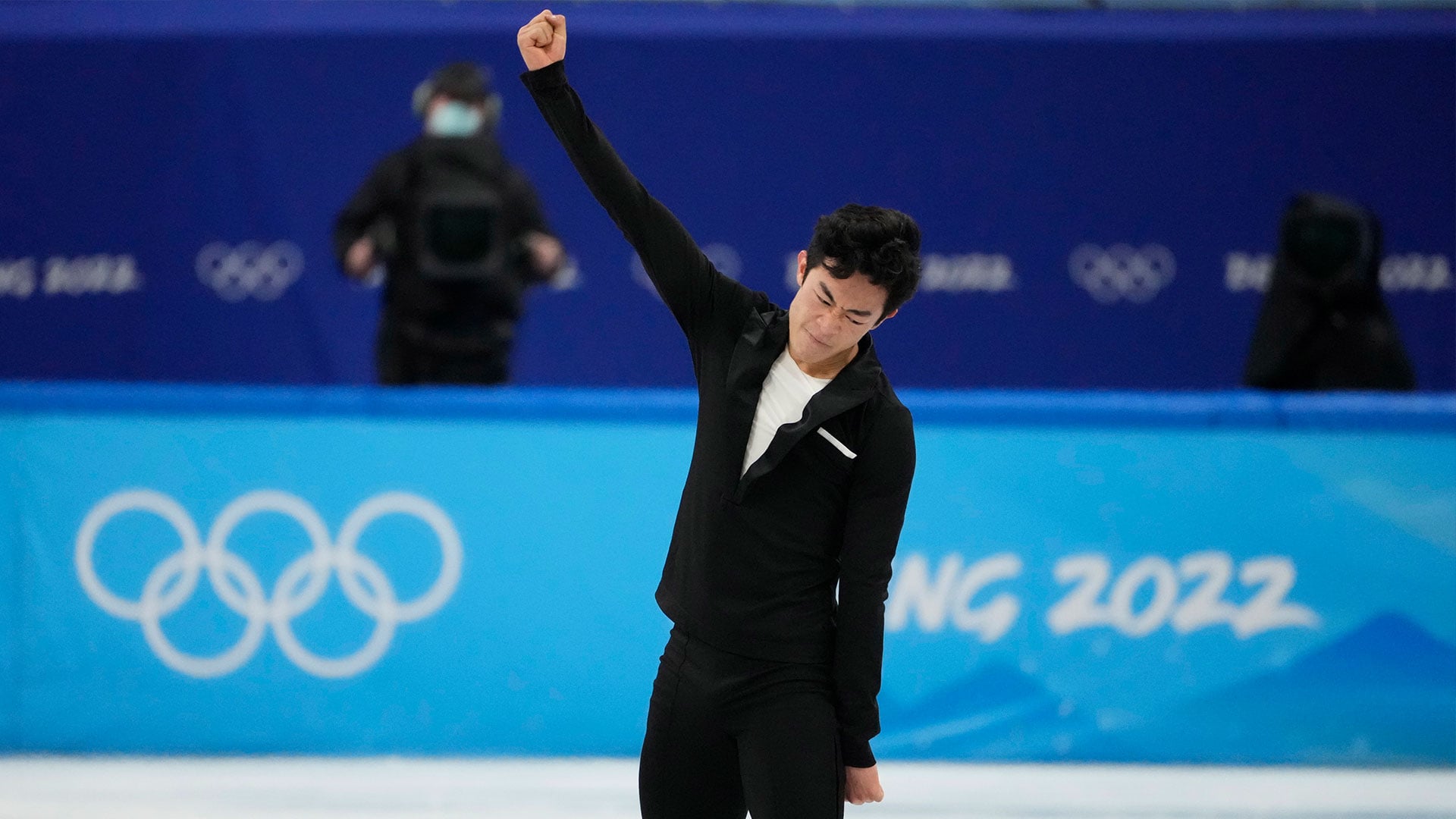 His right arm came flying through the air in an arcing fist pump, a public gesture of intensity rare for Nathan Chen but one that was perfectly understandable when it happened.

“I have no idea what came over me,” Chen would say. “It just felt right.”

He was happy. And relieved. And expressing in one brief, emphatic movement what Chen called “a full spectrum of emotions you can feel in one moment,” the moment that followed his flawless and impassioned skating.

For an athlete who admits to a predilection for keeping things bottled up, this was the time to let the cork pop.

After all, Chen had once again exploded his sport’s limits, and this time he did it in the Olympics, the competition where he had imploded four years ago.

With the highest-scoring short program in figure skating history, Chen was a supernova in a competition full of brilliance even if one of its expected stars, Yuzuru Hanyu of Japan, dimmed with a huge mistake at the start of his Tuesday performance at Beijing’s Capital Indoor Arena.

All six men who made it into the final group for Thursday’s free skate did so with personal best scores. Chen’s was 113.97, and that gave him a nearly 19-point lead over two-time reigning Olympic champion Hanyu (95.15), who wound up eighth. It was Hanyu’s lowest finish in any phase of a competition since a ninth in the short program at the 2013 World Championships.

Despite his “can-you-top-this?” skate, Chen goes into Thursday’s free skate with less than a six-point lead over Japan’s Yuma Kagiyama (108.12). That lead can disappear with one badly botched jump.

“Nathan Chen had a perfect performance,” said Japan’s Shoma Uno, third at 105.90. “For any athlete, it will be extremely difficult if not impossible to win over him.”

Four days earlier, in the short program of the team competition, Chen had begun to erase the memory of his two poor short programs at the 2018 Olympics. His score last Friday, 111.71, was then the second highest ever, behind the Hanyu mark of 111.82 Chen would eventually top.

“Of course it builds confidence knowing I can do that,” Chen said of his strong showing in the team event. “Then it’s, ‘I have to do it again exactly like that.'”

No other man ever has attempted a more technically difficult short program than Chen’s, with its quadruple flip, triple axel and, in its latter half, a quadruple lutz-triple toe loop combination. Remarkably, this rendition actually was better than the one in the team event, in its fluidity, jump execution and the scores it received.

It’s no wonder that Chen and his coach, Rafael Arutunian, decided to return to the Charles Aznavour song, “La Boheme,” after a short program to different music he had used at the start of the season did not suit him well. Two years after he first skated to the Aznavour, a program choreographed by Shae-Lynn Bourne, an artistically more mature Chen, now 22, has grown into the ability to better express its themes of an artist’s youthful joy and pain.

“The music is amazing, and Shae-Lynn did an amazing job interpreting the music in her own way (and) that allowed me to adapt my own style into it,” Chen said.

His command of it Tuesday earned Chen not only the highest technical marks, as expected, but also the highest component scores, which has rarely been the case when he competed against Hanyu.

Chen was aware that Hanyu, who skated an hour earlier, had faltered.  It happened on his opening jump, a planned quadruple salchow, which Hanyu popped.

It became a single salchow that earned no points under short program rules requiring the jump to be a triple or quad. Had Hanyu landed it as planned, it would have been worth about 12 points.

Hanyu said his problem on the jump owed to taking off from an unexpected hole in the ice.  He had executed the jump perfectly in the final warm-up.

It is not impossible to make up the deficit Hanyu faces. It is harder because he will need more than one mistake by both Chen and Kagiyama to have a chance.

Hanyu likely will be more focused on trying to make history by becoming the first to land a quadruple axel. Chen has beaten Hanyu in their three other meetings since the 2018 Olympics.

“You can’t ever count him out,” Chen said of Hanyu. He is two-time Olympic champion for a reason. No matter what he does, he will always be a true figure skating icon, one of the greatest ever, if not the greatest ever.

Chen will be the final man on the ice in the free skate. Hanyu will have competed more than hour earlier, as the penultimate man in the previous group. That time gap between these two usually close rivals will seem odd.

No odder, though, than Nathan Chen letting all his emotions come out. “Unconventional for me,” he said. Call it exceptional, just like his skating.