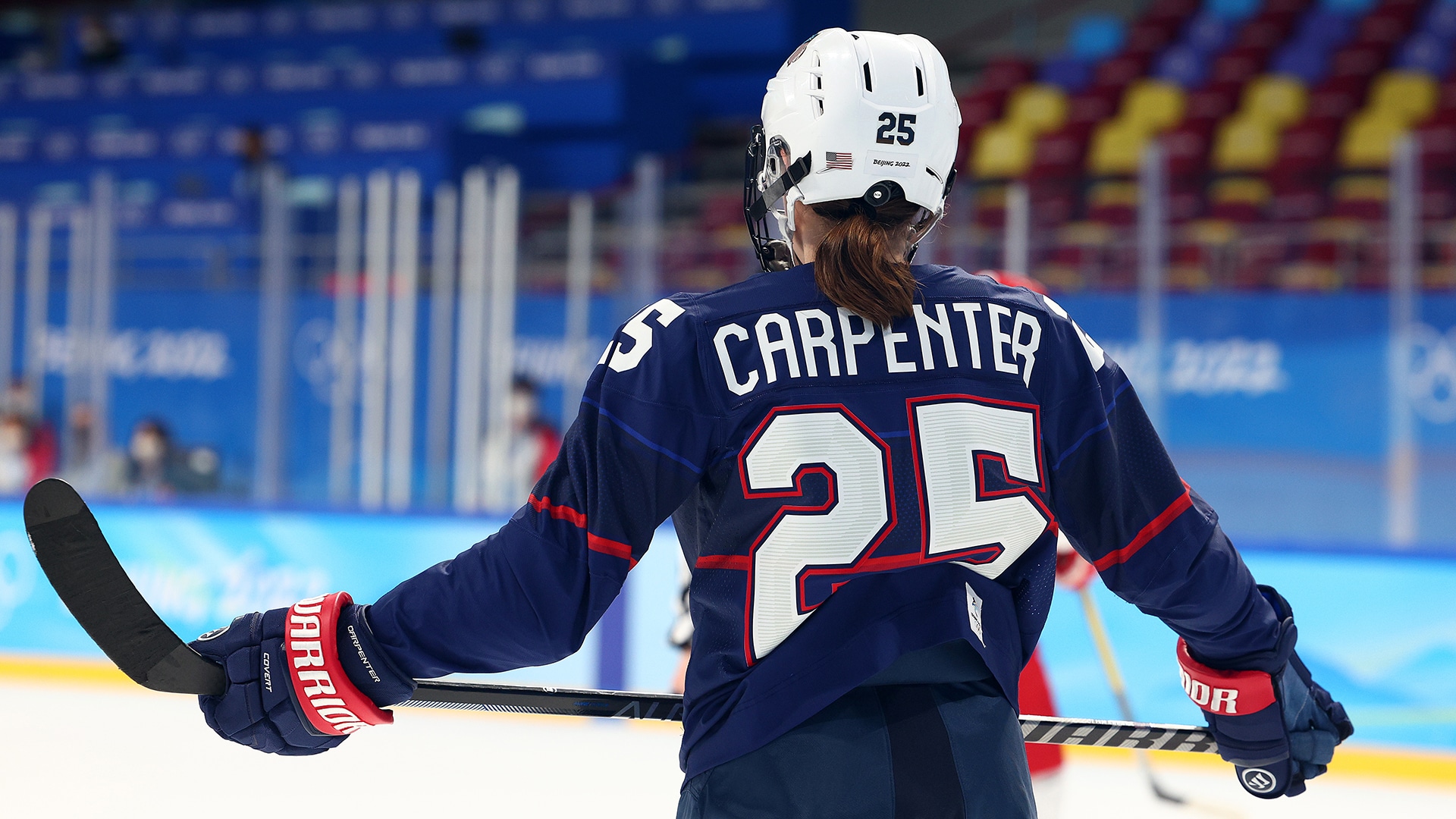 Alex Carpenter looks on at the Olympics. – Credit: Elsa/Getty Images

The stars will be out in full force Wednesday night when the U.S. and Canadian women’s hockey teams meet in the gold medal game for the sixth time in the last seven Olympics.

Most true hockey fans are quite familiar with names like Hilary Knight, Kendall Coyne Schofield and Marie-Philip Poulin, but several other players on the U.S. and Canadian rosters will play integral roles for their respective squads when the puck drops in the title game.

Sarah Fillier has been the big breakout star of this year’s women’s tournament. And she hasn’t just performed well for Canada — she’s dominated.

The 21-year-old forward has scored a ridiculous eight goals in her first six games as an Olympian. Only Brianne Jenner has netted more goals that Fillier has in the women’s tournament. With her three assists taken into account, the Princeton University product is averaging nearly two points per game, making her one of the top point producers at the Olympics.

She may be young, but Fillier has already become one of the top players on Canada’s roster, and possibly in the world.

It should be noted, though, that the Americans held her to “just” one point — an assist — in their preliminary tilt last Monday. The Canadians will not doubt be looking to get Fillier involved in the gold medal game, and she’ll certainly have the attention of the American defenders as they look to shut her down.

Speaking of American defenders, Savannah Harmon has had a nice breakout of her own at this year’s Olympics. Also a first-time Olympian, Harmon has done nothing but lead all U.S. defenders with seven points (two goals, five assists) through six games.

Only two other defenders at the Olympics have logged more points than Harmon at the Games, and she’s quickly become a mainstay in the U.S. lineup.

At 26 years old, Harmon is making her Olympic debut much later than many U.S. women’s players. But the former Clarkson University captain most certainly isn’t playing like a rookie. If anything, she’s been the best defender on the roster, and her ice time is proving it.

Harmon earned 24:38 of ice time in the Americans’ prelim against Canada, and it’s likely she’ll be deployed just as often — if not more — in the title game.

Believe it or not, as solid as Harmon has been for the Americans, she hasn’t been the most impressive rookie defender at the Olympics. That honor has to go to Canada’s Claire Thompson.

With a goal and a pair of assists in Canada’s semifinal tilt against Switzerland, Thompson became the all-time leader in points by a defender in a single Olympics with 12 (two goals, 10 assists). And she still can’t believe it herself.

“It was never something I thought that I would ever be anywhere close to,” said Thompson after her team’s victory over Switzerland. “The team’s just been doing so well all tournament. Our offense has been generating a lot, and I’m just happy to be here.”

Canada has been firing on all cylinders offensively since the Games began, and it all starts with Thompson in the back end, who’s been counted on to orchestrate breakouts in the defensive zone and join the rush in transition. She’s been a terror for Canada since Day 1, and that won’t change against the Americans.

After being cut by the U.S. team ahead of PyeongChang, Alex Carpenter has returned to the roster with a vengeance. She missed out on winning a gold medal in 2018, and she doesn’t want to let this opportunity slip through her hands.

Carpenter may not be breaking scoring records like Thompson or netting goals at will like Fillier, but she has been a key cog in the U.S. lineup all tournament. She’s averaging a point per game for the Americans, and only one player on the U.S. roster (Knight) has scored more goals in its six contests.

The 27-year-old is no stranger to putting pucks in the net — she netted five goals in seven games for the U.S. at the Women’s World Championship over the summer, and she’s on pace to do the same for the Americans at the Olympics.

Carpenter is entering the gold medal game with a gigantic chip on her shoulder, and one can imagine she’ll be hungry to leave her fingerprints all over a successful U.S. title defense.