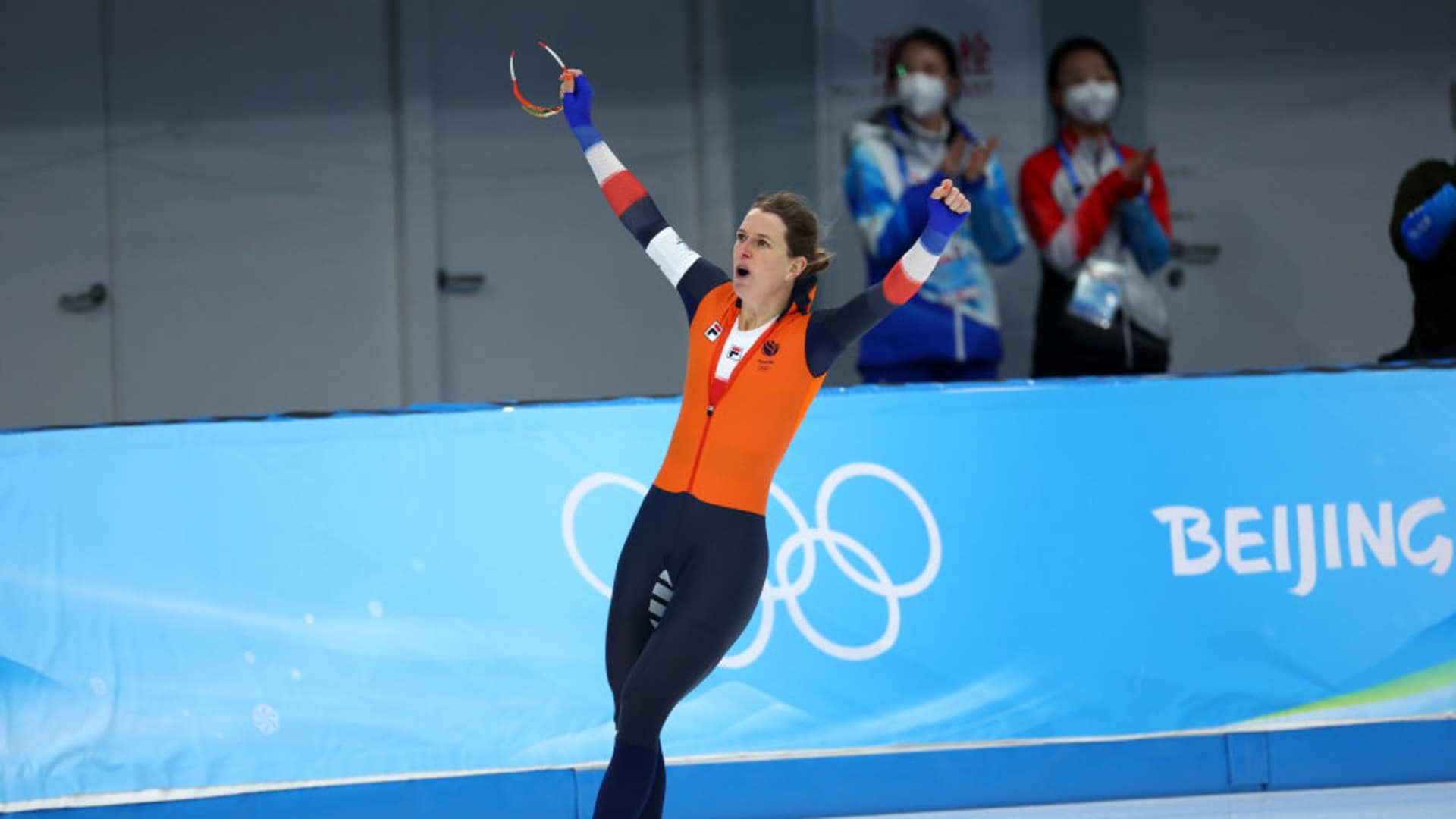 Ireen Wuest of the Netherlands earned her sixth-career gold medal by setting the Olympic record in the women’s 1500m race on Monday. She has now won gold in the 1500m at three of the last four Winter Olympics.

Wuest is racing in her final Winter Olympic Games at 35 years old, but her result on what has been a difficult track for skaters to maintain speed shows how dominant she still is. She finished with a time of 1:53.28 and had the fastest lap of the event at 27.86.

The Dutch skater is now a 12-time Olympic medalist, the most ever in speed skating.

“It’s really hard to describe,” Wuest said in a press conference. “A lot of emotions, especially the good ones … It’s insane, actually.”

Miho Takagi of Japan finished second behind Wuest, as she did in 2018, with a time of 1:53.72. That was a faster skate than Wuest put together to win gold at the 2018 Winter Olympics. She is now a four-time Olympic medalist after winning three in 2018: mass start, team pursuit and women’s 1500m.

Antoinette de Jong of the Netherlands earned the bronze medal. She said in a press conference following the event that this was not a great race for her, but she is happy to win a medal.

At least two Dutch skaters have reached the podium in the women’s 1500m for three straight Winter Olympic Games.

Brittany Bowe from the United States entered the event with podium aspirations having won the silver medal at the 2021 World Championships. The American had a booming start but faded fast and finished in 10th place with a time of 1:55.81.

Editor’s note: Re-live the event as it unfolded in real time with our live blog updates below

There are 15 pairings set to compete. Every skater gets one chance to set the fastest time.

Bowe will race in the 14th pairing and Wuest in the 12th.

The event starts with 23-year-old Ellia Smeding of Great Britain and Huang Yu-Ting of Chinese Taipei.

Sixth pairing: Adake Ahenaer of China bests Manganello Kilburg at 1:58.59. She made up ground in a strong finish after falling behind the American’s pace.

Seventh pairing: ROC’s Evgenia Lalenkova hits 1:55.74, the best time of the first seven pairs by far. The 31-year-old won the 1500m at a Russian Olympic qualifying event in December. Sloeva remains in second.

Ice resurfacing break at the Ice Ribbon. Final seven pairings up next.

Ninth pairing: The action returns with Dutch skater Marijke Groenwoud taking the lead at 1:54.97. Yin Qi of China grabs third place for the time being.

10th pairing: Nana Takagi of Japan, who won gold medals in the team pursuit and mass start events in 2018, takes second at 1:55.34. Her sister, Miho, is up in the final pairing.

11th pairing: Antoinette de Jong hits 1:54.82 to grab the top spot. The Dutch skater is a two-time Olympic medalist. Wuest is up next.

12th pairing: Wuest sets an Olympic record at 1:53.28. This is her final Olympics, but she is not leaving anything out there. She beat her gold medal-winning 2018 time by over a second.

Three Dutch skaters are in the top-three.

14th pairing: Bowe put together a massive start but faded. She slides into eighth place with a time of 1:55.81.