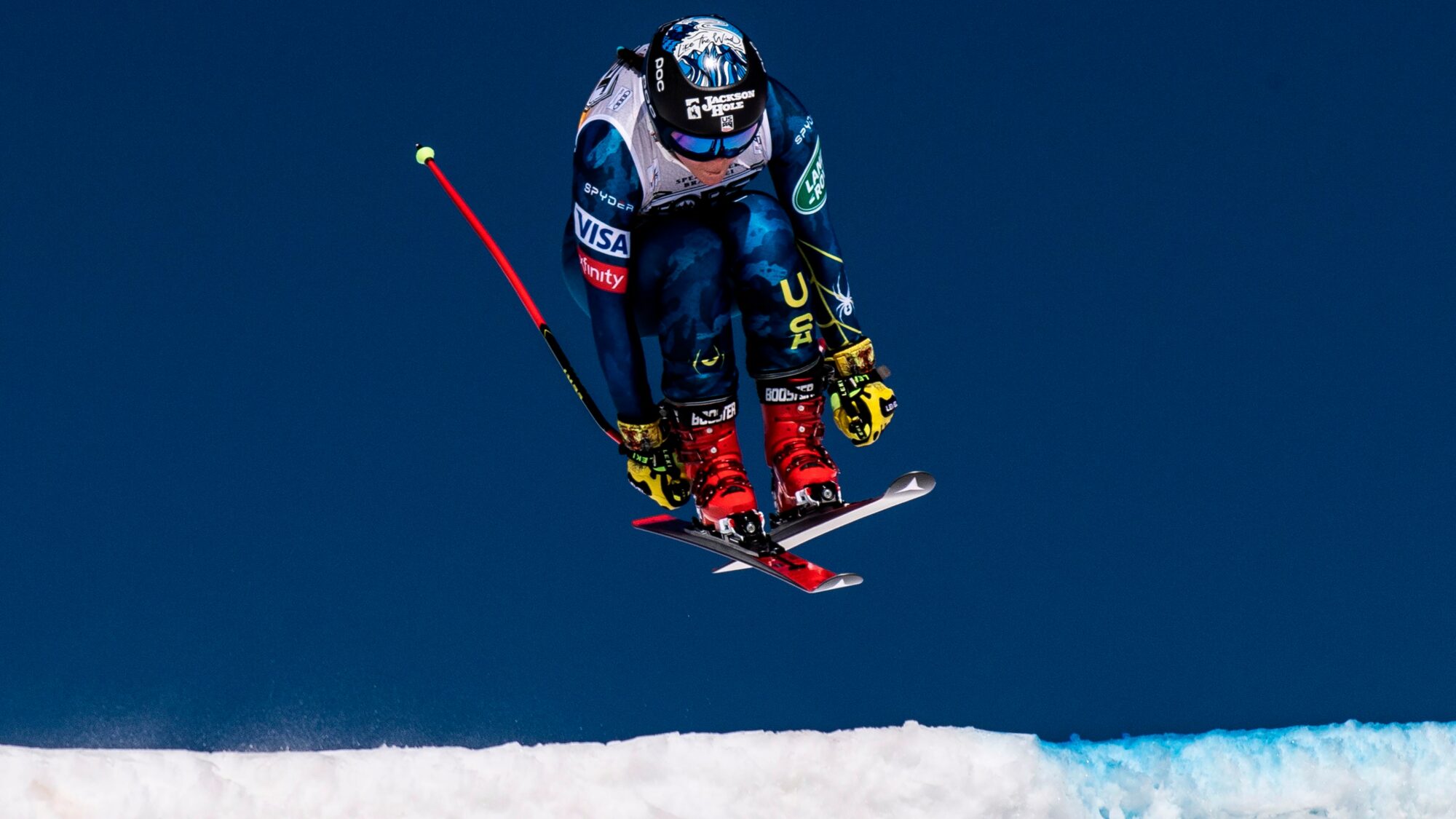 On the morning of Jan. 21, U.S. Alpine ski racer Breezy Johnson started a downhill training run on the famed Olympia della Tofane course in the Italian Dolomites ski resort of Cortina d’ Ampezzo, which hosted the 1956 Winter Olympics and will host them again in 2026. Johnson was on fast skis that day, rolling, and exited the Tofane Schuss, a ribbon of racing snow between two craggy rock faces, at 72 miles per hour, the fastest of any racer that day. It is a memorable place — racers say when you’re in the schuss, you can hear the wind screaming through the airholes in your helmet. “I was really hauling coming out of the Tofane chute,” says Johnson. “Really, really hauling.”

There is a short, flat stretch after the chute, and then the course drops out from underneath skiers, creating the Duca d’Aosta jump. “I absolutely launched off that jump,” says Johnson. Too far. In the air, Johnson rose fully upright and spread her arms, trying to both slow herself down and to prepare for the landing. “Trying to give myself a little extension,” she says. Johnson dropped onto the snow past the downside of the hill and closer to flat earth, creating extra forces on her lower body upon impact. “Immediately upon landing I heard this huge crack in my knee,” she says. “And then pain. A lot of pain.”

Much attention has been given in recent days, and months, to the nebulous, but very real concept of Olympic pressure, and the ways in which it is different from other forms of athletic pressure. Most pointedly, the every-four-years infrequency of the Games, and the amplified media attention on Olympians in the months leading up to them, is a time-honored tradition that has grown more intense. It’s all very real and has warranted discussion. But there is something equally painful, or at the very least painful in a different way: Having a genuine chance at winning a medal, and not getting to the Olympics at all.

Johnson puts it her way: “Competing and failing is way better than not being able to try at all,” she says. “To not have the opportunity is way worse than squandering the opportunity.”

At the instant she soared into the sky in Cortina in January, two days past her 26th birthday, Johnson was the No. 2-ranked women’s downhill racer in the world, and had finished second behind Italy’s Sofia Goggia (2018 Olympic downhill gold medalist) in all three of her completed downhill races this season. She had been doing the best racing of her life; her career was ascending, and she was a solid medal favorite for downhill at the 2022 Winter Olympics, which takes place Monday night. (A further twist: Goggia crashed and was injured in Cortina two days after Johnson; she is expected to race the Olympic downhill but might be more beatable than she has been). All that ended when Johnson landed off the Duca jump.

In race video, Johnson drops from high in the air and lands most heavily on her right ski, her right knee squeezed into a deeply compressed position, almost with her backside on her bindings. That’s when Johnson heard the crack. “I thought it was my meniscus,” – the cartilage on the inside and outside of the knee joint – “being torn into a bunch of pieces,” says Johnson. Instead, it was cartilage at the top of the joint. “My knee twisted and the cartilage broke away, the way it does when you twist a chicken leg, or wing.” She fell and slid in a shower of snow spray into the safety netting toward the left side of the course. Johnson was able to stand, step back into her bindings and ski gingerly down the hill, a brief cause for optimism that did not last.

It had already been a difficult 10 days for Johnson. At the previous World Cup speed stop in Zauchensee, Austria, Johnson also crashed during the first run of downhill training, suffering cuts and bruises on the same right knee as well as minor whiplash. She missed that weekend’s downhill races, but was prepared to race in Cortina. After the fall, Johnson spent four days consulting with the U.S. Ski Team’s medical team, and sought consult from other doctors, as well. On Jan 25, she withdrew from the 2022 Games. Doctors had told her it might be possible to postpone surgery and race at the Olympics, but that she would likely not be 100% and would be risking further damage.

Johnson flew back to the U.S. and underwent surgery on Feb. 3, the day before the Opening Ceremony. She is living temporarily with friends in Park City, Utah, and will return home to the Jackson Hole area when her knee is ready to bear weight in mid-March. She expects to be on skis again in eight months. Those are the antiseptic numbers. The emotional reality is harsher.

“I’ve been shedding a little bit of my personality for the last couple weeks,” says Johnson. “I feel almost like I’m not an athlete anymore. I can’t even put into words what it’s been like watching the Olympic races, and it’s going to be even more complex watching the women’s downhill. I’m seeing people doing things that I want to do, and I wish I could do those things, too. I wish I could be a part of it.” Johnson skied at the 2018 PyeongChang Olympics, finishing seventh in the downhill and 14th in the super-G; solid performances, but at these Games, she would have been more competitive, less experiential.

To understand Johnson’s pain, it helps to understand her path. She was raised by East Coast parents – Greg Johnson, a construction superintendent; and Heather Noble, an attorney – who met while skiing in Jackson Hole. (Mikaela Shiffrin’s parents also bonded over ski weekends). Johnson was named Breanna, but, she was nicknamed Breezy and changed her name, legally, while in high school. As a skier, while Johnson was fast, she was less technically stunning than the racers who catch the eyes of the national ski team. “Part of the reason why Breezy wasn’t a phenom,” says Noble, “was because she didn’t have those kinds of skills. So, she never had ‘knocked your socks off results’ in GS and slalom.” But Johnson remained fast, and fearless, and plugged away at her technical skiing.

Johnson first skied on the World Cup in December of 2015, just before her 20th birthday. Many top women join earlier (Shiffrin was just short of 16, Lindsey Vonn was 16, both in slalom; but Picabo Street, a speed skier like Johnson who also was not identified early, joined at 21). Injuries have shadowed Johnson’s career, even more than most in a sport where surgery can seem as common as lunch. Johnson suffered a tibial plateau fracture in her left leg in 2017, and rehabbed it so thoroughly that she made it to PyeongChang. But in the autumn of 2018, she suffered a partially torn ACL in her right knee and missed the 2019 World Cup season entirely. Nine months later, she tore the MCL and PCL in her left leg in training.

Again, she came back, and this year ascended to her highest level. Then came the Cortina crash, and the prospect of another surgery, and more rehab. And with all of that, a sense of despair. “The first time I injured myself,” says Johnson, “I was kind of naïve about the whole process. I was like, okay, everyone in ski racing gets injured, everyone goes through this. It’s a risky sport, people get hurt. I have to pay my dues. These are my dues. And when I’m done, my dues are paid. I didn’t think, oh, this can happen again and again. Just because you work your ass off and come back to the top level of the sport, that doesn’t mean you can’t get hurt again… right before the Olympics.”

Johnson slowed herself. “It just means nothing is guaranteed,” she says. “Careers are longer these days. I have more Olympic opportunities left, more time to win a gold medal. But it’s just a really big mix of emotions right now.”

My interview with Johnson’s mother was before the Cortina crash. But even then, Noble’s memory of Johnson’s previous injury history is instructive. “Ski racing is something that Breezy loves to do,” says Noble. “I mean she really loves it. So the first time she got hurt, there was this sense of mourning the loss of something she loved.”

And then she got hurt again. And again. It was just really, really hard.

Those memories make the present especially challenging for Johnson. The first time, surgery and rehab are new. They are no longer new for Johnson. The shape of the process changes; it becomes more familiar. Diminishing novelty makes the grind less empowering, and the result less trustworthy. But she will approach it no less enthusiastically. After winning a silver medal in the Olympic super-G last week, American Ryan Cochran-Siegle, like Johnson, a multiple injury survivor, said, “It’s a brutal sport, but it’s beautiful sport.”

Johnson won’t let go. Can’t let go. “If I didn’t love the sport as much as I do, maybe I wouldn’t be hurt so much by it,” says Johnson. “But I love the good parts way too much to stop going. As bad as the sadness has been from this injury, and all my other injuries, the happiness I’ve felt doing the sport at the top level is still way more than worth it.”

She will watch Monday night with friends, distant in body and spirit. Weeks from walking unaided, months from stepping into bindings, four years from another Olympic opportunity. More dues to pay.