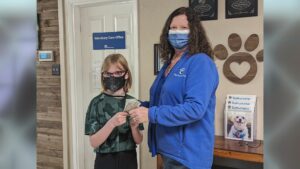 MEDFORD, Ore.  — A Ruch student raised hundreds of dollars for a local nonprofit to show her parents that she was responsible.

Bailey Houghton asked her parents if she could adopt a kitten but her parents told her they didn’t think she was responsible enough.

She decided to bring a donation box to raise money for the humane society.

When the principal found out she announced it to the school.

“I thought I would get to at least $100,” said Bailey Houghton. “I hope that the use would give animals better lives.”

“We got the call about how much money she raised; which is amazing. But no, she took it upon herself,” said Estrella Cervantes, the Operations Manager of SoHumane. “Which is awesome to see young kids doing that.”

And yes, Bailey finally got her kitten.

She describes him as a black kitten with green eyes named Loki.