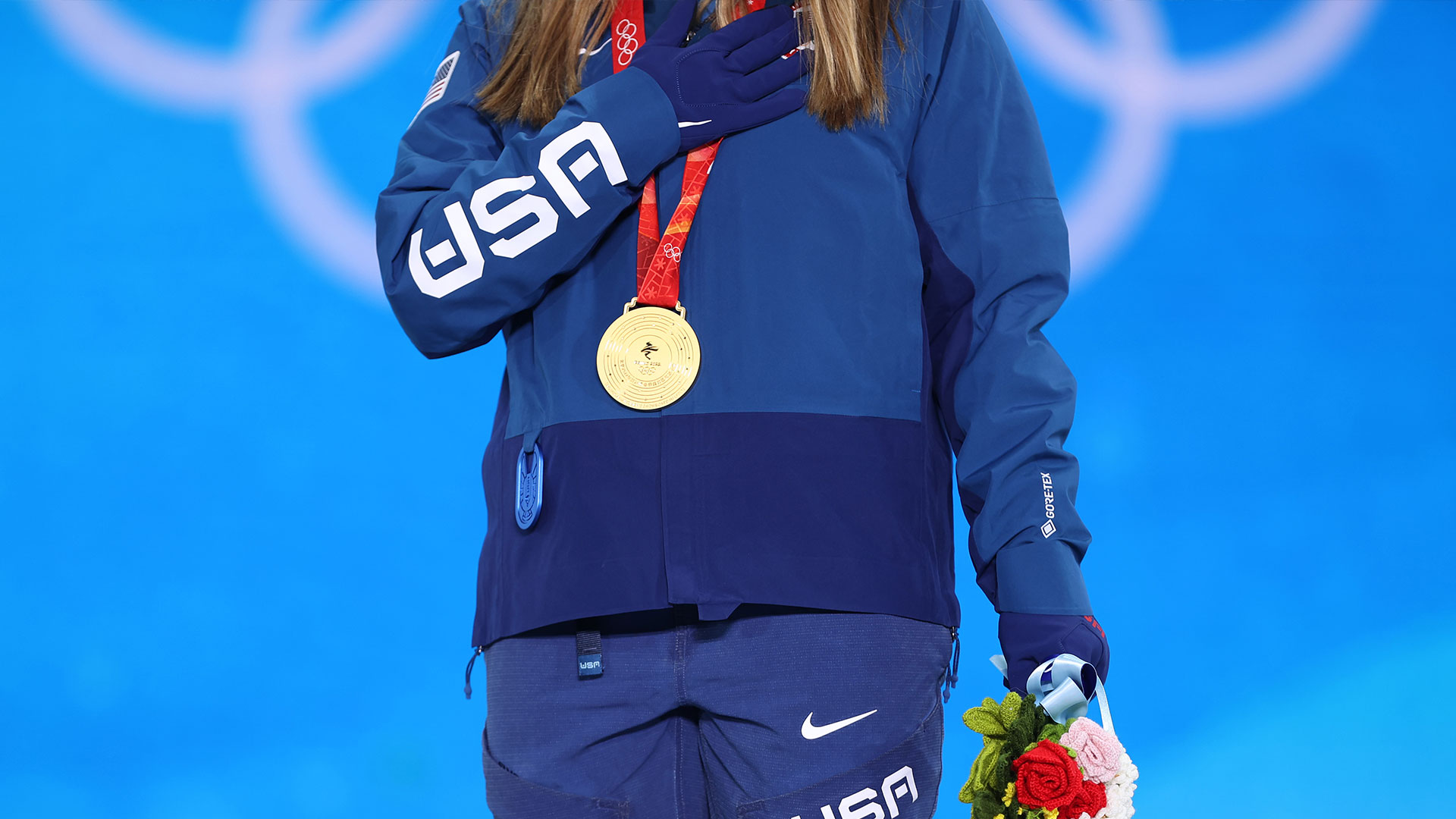 Let’s start, as you might not usually do, with two big-time goodbyes.

If Shaun White didn’t invent snowboard hype, he most certainly reinvented it. With apologies to Ross Powers and Karine Ruby, White’s arrival atop the podium in 2002 set the sport on fire (which is terribly awkward because of the snow’s preferred temperatures).

White nearly nailed down one final Olympics medal with a tremendous second run in the half pipe, but instead finished just off the podium. In tears, White was saluted by the athletes there and essentially the entire snowboarding world.

Then there’s Katie Uhlaender, a two-time World Champion skeleton racer who twice tempted the podium in five Olympics before arriving in China for this one. The 37-year-old may not be done, but it seems likely she will not race in Italy.

Those five Olympics are a record for a women’s skeleton racer, and Uehlander’s final Olympic bow was a good one. Uhlaender finished sixth, just as she did in her first Olympics in 2002.

SEE MORE: White rides off into the sunset after final halfpipe run

Let’s hear it for the women stars of Team USA

Team USA’s big names delivered the goods in their events, and even the top names who didn’t accomplish their Winter Olympic goals managed to inspire a great many.

A gold medalist in 2014 and 2018, Mikaela Shiffrin entered the Games with a lot on her plate and plans for more medals. Shiffrin acknowledged weighty emotions in her first Olympics since the death of her influential father Jeff and then came multiple uncompleted races and no medals. But Shiffrin struck a tone for those who did win as well as those who showed the spirit of competition, inspiring with class in the face of disappointment.

And while Shiffrin showed honor after coming up short under immense pressure, more than a handful of other Team USA women arrived on the podium after finding their way to the podium.

Chloe Kim, Erin Jackson, Brittany Bowe, Elana Meyers Taylor, and newest American of the bunch Kaillie Humphries were hyped in the run-up to the Games and will be hyped coming home with medals.

Kim is the first woman to win back-to-back snowboarding halfpipe golds, Bowe and Jackson shared a storyline like few others, and Meyers Taylor even more so. Humphries would like a word, too.

We’ll get to all of them in due time, but next up is a redemption story of the highest order.

Nathan Chen in a class of his own

A big part of us wants to just post his videos, because words are unlikely to do the figure skater justice.

The 22-year-old phenom followed up his world-record short program with a near-perfect free skate to win the figure skating men’s singles competition.

Team USA did not claim a medal on the first day of the Games, which carries a mild amount of surprise, but the USOC wouldn’t have been shocked to see that opening medal come in women’s slopestyle.

It did, but wasn’t won by star snowboarder Jamie Anderson, who finished ninth.

Instead, it was Julia Marino who stunned the snowboarding world by posting a better run than anyone not named Zoi Sadowski-Synnott with a cab double underflip 900 off “The Matrix” and a frontside double cork 1080 on the last hit.

“It’s honestly hard right now [to put into words], there’s just so much emotion,” Marino said. “Right now it’s just pure excitement and happiness for everything, it was a great day – the weather was perfect, the course was perfect, the girls were riding well, couldn’t have asked for better finals.”

Jacobellis, Baumgartner bounce back… one after quite a long time

Lindsey Jacobellis may take umbrage at the notion of such a long-term bounceback given a spectacular career, and Nick Baumgartner may not have even realized he was bouncing back when he joined his partner on the podium.

Jacobellis‘ hot dog moment in Torino almost two decades ago cost her an individual gold medal that took 20 years to arrive around her neck, finally materializing in women’s snowboard cross. She wouldn’t have to wait too long for a second gold.

For his part, Baumgartner was crushed when he missed out on a spot in the men’s snow cross final, apologizing to his young son from across the globe.

Jacobellis and Baumgartner then took a gold medal together when the former followed up the latter’s impeccable opening run with a fine ride of her own.

“This gold medal is awesome, but [Landon]’s still the best thing that I’ve ever done and ever will do,” he said, via Liam Nee. “For him to see me fight through that adversity and do stuff right before he’s about to graduate high school and go on to figure out what he’s going to do in life, is huge.”

Elana Meyers Taylor and Kaillie Humphries might’ve been the highest-profile 1-2 punch in Team USA‘s Winter Olympics, but the women’s bobsled super team wasn’t the only time Americans finished with the top two spots on the podium.
The first-ever women’s monobob finished duo-USA when Humphries winning gold in her first Olympics as an American citizen and Meyers Taylor coming in a solid second.
Alex Hall and Nick Goepper took the top two spots in the men’s freeski slopestyle final.
Hall posted a 90.01 on his first run to go top of the leaderboard and he never came down. His biggest threat turned out to be Goepper, who ran up a silver-claiming score of 86.48.

The United States won a silver medal in team figure skating for the first time in its decorated history, finishing shy of only one group in the Russian Olympic Committee.

Nathan Chen started the show with the second-highest score ever recorded in the men’s short program, and Madison Hubbell and Zachary Donohue then extended the lead with the rhythm dance.

Alexa Knierim and Brandon Frazier finished third in the pairs short program but posted a personal best, and Karen Chen took the event into the women’s short program.

Next was Vincent Zhou finishing third in men’s free skate, skating to “Crouching Tiger, Hidden Dragon” in homage to his parents’ birth nation and event-host China.

Knierim and Frazier did not have a tremendous showing in the pairs free skate but also did not ruin the medal hopes of the Americans, keeping glory in play for Madison Chock and Evan Bates to dominate the free dance. Karen Chen then showed up big time in the free skate, and silver was there for the United States.

If you can achieve something that is realistically described as “fulfilling your family destiny,” that seems like you’ve likely done something pretty awesome.

Ryan Cochran-Siegle went from a dramatic crash in Kitzbuhel to a silver medal in the super-G that came 50 years after his mother won Olympic Alpine skiing gold.

As Tim Layden righteously illustrates, “Barbara [Cochran] watched on that laptop as Ryan, wearing bib No. 14, pushed out of the start house at the top of the craggy race course called The Rock, and delivered the performance of his life, carving magnificently down the perilous run to win a silver medal.

It’s not quite a neat path that intertwines four women’s Games, but there’s an inextricable spirit shared by Erin Jackson, Brittany Bowe, Elana Meyers Taylor, and Kaillie Humphries in Beijing.

It started before the Olympics, when Bowe passed on one of her events to Jackson, the star skater who just had a bad day at trials. Jackson would go on to win gold in her event, and Bowe claimed a medal later in the Games.

Bowe got an unexpected honor of her own, but only because Meyers Taylor tested positive for COVID-19 and could not serve as flag bearer for the Opening Ceremony.

When Meyers Taylor selected Bowe to replace her, the bobsled star did not know whether she’d compete in front of her family at the age of 37. And Meyers Taylor‘s unknown status as a competitor was something keenly felt by Humphries, whose calling out of alleged abuse from her Team Canada coach could’ve left her without a nation. Instead, she’d finish 1-2 with Meyers Taylor.

Throw in Jessie Diggins making history when she won bronze in the women’s individual sprint (freestyle) to become the first two-time Olympic medalist in U.S. cross-country skiing history and… well…

You can’t say enough about these women, fellow humans. They rule.