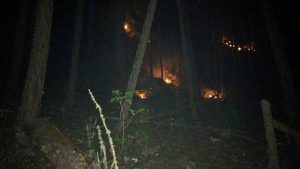 The Oregon Department of Forestry’s Southwest Oregon District said Wednesday’s evening’s thunderstorm that passed over the area brought up to a quarter inch of rain to some areas.

The rain may have cooled down some portions of the fire, but it also added moisture to the ground.

According to ODF, the moisture combined with burning root systems can weaken trees, bringing the potential for them to fall suddenly and unexpectedly.

The conditions both compromise firefighter safety and could bring burning material down hills through the current fire lines.

ODF said a Level 1 (be ready) evacuation notice is still in effect for residents in the area of Evergreen Drive and Lewis Road near Prospect.

650 personnel are working to contain the fire along with 9 helicopters, 19 engine and 17 water tenders.